In Memoriam: A. N. Kasimatis: viticulturist, researcher and extension educator (1921-2016) 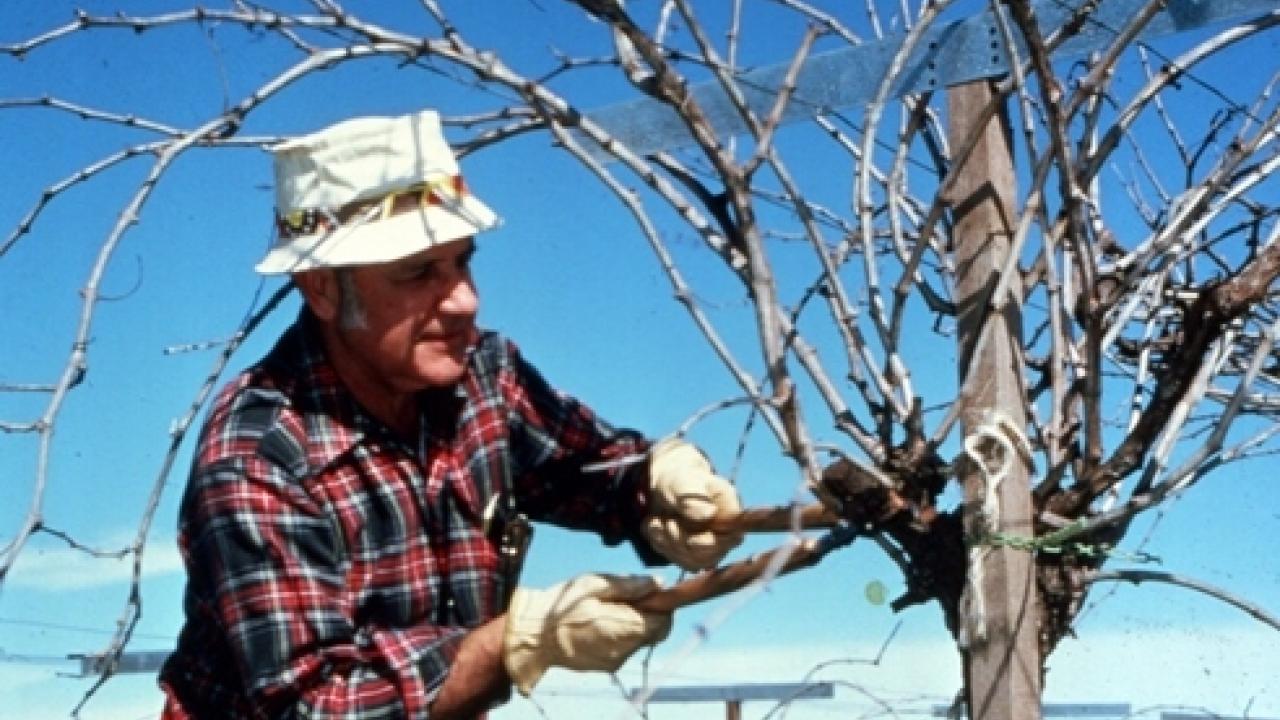 Amandus Nicholas Kasimatis was born in 1921 in San Luis Obispo, California and grew up in San Pedro, near Long Beach in Southern California. Known to colleagues and growers simply and affectionately as "Kas", he became one of the most well-known and well respected grape experts in California.

Kas first attended UCLA majoring in subtropical horticulture, where the emphasis was citrus and avocados. However, his studies were interrupted by World War II during which he served in the Navy as a Lieutenant J.G. stationed in the Pacific. He was released from service in June 1946 and that fall he continued his studies at UC Davis. He completed his Bachelor of Science in Horticulture in June 1947. Following graduation he spent another semester doing graduate-level studies in horticulture. While at UC Davis, he took viticulture coursework offered by well-known professors, A. J. Winkler and H. E. Jacob.

In spring of 1948, Kas joined the UC Cooperative Extension (CE) Service (then called the Agricultural Extension Service) in Kern County as a Farm Advisor. With his background in subtropical horticulture at UCLA and his temperate crop training at UC Davis, he was a good fit for his assignment of table grapes and tree crops that included citrus; at that time the winegrape acreage there was small. Kern County was known then, as it is now, for having large companies and Kas worked closely with those grape pioneers such as Di Giorgio, Perelli-Minetti and Giumarra. As farm advisor, Kas had his first experience with problem-solving research, where he and entomology colleagues discovered that small defects on the surface of Santa Rosa plums in summer were actually caused in spring by the feeding of thrip insects on very young fruits.

In 1955, Kas was offered a job at UC Davis, stationed in the Department of Viticulture and Enology, as Extension Specialist in viticulture with statewide responsibilities, one of the first such positions created. Early on at Davis, he was able to complete his graduate work, receiving a Master of Science in Horticulture in 1957. In this new role, Kas was the sole specialist with responsibility for grape production in California, including table grapes, raisins and wine grapes.

As the grape industries grew, CE added more Farm Advisor positions in counties where grapes were significant and eventually added two more specialist positions, Fredrik L. Jensen and L. Peter Christensen who, respectively, concentrated on table grapes and raisins in the San Joaquin Valley. It was with all of these colleagues, as well as department viticulturists, that Kas was most active. He completed a number of research projects on a wide range of topics. Of special note was his support for the UC Davis Foundation Plant Services "clean stock" program. Kas started pioneering studies on the clonal differences of winegrape selections offered by FPS, built on the largely observational trials of Olmo. His work refuted one of then-proffered hypotheses that differences in selections were simply variations in their virus status. His replicated research with both Chardonnay and Cabernet Sauvignon was the first of its kind in California. Of special note was his involvement in identification of superior selections of Zinfandel, a project later known as the Zinfandel Heritage Vineyard, where his experience with that variety was crucial to the project's success.

Kas became widely respected as one of the most effective viticulturists in diagnosing problems in vineyards due to his renowned skills of observation, investigation and deduction. He was heavily involved in a wide range of research areas, working on rootstocks, trellises, nutrition, crop thinning and canopy management, among others. In work across disciplinary lines, Kas was instrumental, along with plant pathology colleague W.J. Moller, in identifying Eutypa armeniacae (later changed to E. lata) as the causal organism in "dead arm" disorder.  The impact of this finding was especially significant as Eutypa was a troublesome affliction in vineyards throughout the world.

Kas was committed to grower education, having started grape field days, both in Davis and at the department's vineyard in Oakville (Napa Valley), where current research results were highlighted. Along with the California Association of Winegrape Growers, he started Wine Grape Day, a successful program that eventually grew to become the Unified Symposium, the largest winegrape convention in the nation.  He initiated and was the key organizer of the Viticulture Short Course, a multi-day course aimed at reminding growers of the fundamentals of growing grapes, as well as keeping them up to date on new information.

The list of extension publications which he authored or co-authored was quite broad, encompassing rootstocks, winegrape varieties, nutrition, trellises and integrated pest management (IPM). As a result of his research, his reputation was not confined to the U.S. His advice was sought from around the globe and he advised on projects in Argentina, Australia (New South Wales, South Australia, and Victoria), Bulgaria, Chile, France, Germany, Israel (West Bank), Italy, Romania, South Africa and Switzerland.

Kas had the "common touch". Of him, the eminent UC Davis enologist Maynard Amerine said, "His enthusiastic inquisitiveness appealed to the growers and played a role in his popularity and success. He was most comfortable in the vineyard with growers, no matter if they were university trained or had learned by experience. As an example, after a visit to Australia, one grower wrote to Kas and stated, "I am pleased I had the opportunity of meeting you and hearing you talk on a wide range of viticultural matters. You have a commendable skill in presenting an answer in a direct and simple fashion -- this is important when one's background knowledge is as limited as mine." In short, he got along well with everyone.

Kas continued as viticulture specialist until his retirement in 1984, after which he remained active as a consultant for another ten years. He was a lifelong member of the American Society for Enology and Viticulture (ASEV) and served as Director and, later, as Secretary-Treasurer in the organization. In recognition of his many career contributions and industry service, Kas was chosen as ASEVs Merit Award winner for 1993, the highest award given by the Society. Kas passed away on May 4, 2016 at the age of 94.