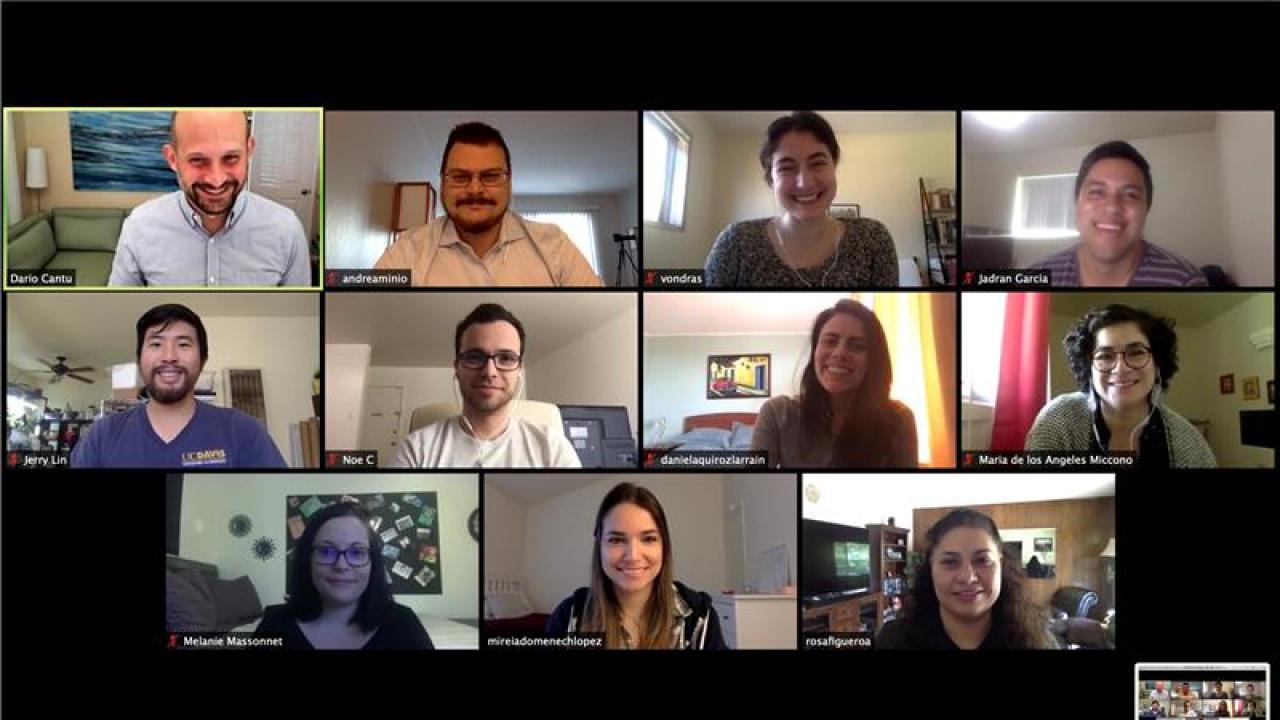 Dario Cantù is a Professor and Plant Biologist in the Department of Viticulture and Enology. Part of his research is currently focused on grape genomics, gathering genetic information from the grapevine by sequencing the genomes of several varieties and then comparing them to find out the genetic differences between grape species and varieties. Every genome is different from another, and every grapevine clone, variety, and species have genetic differences. These differences can be very subtle or more substantial. For example, Pinot Noir and Pinot Blanc have distinct color differences due to the deletion of a single gene in the genome.

Early on in his research, Dr. Cantù started gathering the funding and collaborations to begin developing tools to study grape genomes. One key aspect to this was to reduce the cost so that these techniques could be more widely used, and then scientists could start appreciating the genomic diversity across and within grapevine varieties. In 2012, there was a single genome reference, and while this was useful, it did not represent the genomic diversity and did not allow researchers to compare, identify, and associate the genetic differences responsible for the phenotypic diversity we observe. Once these tools were available, Dr. Cantù and his lab could begin to explore fundamental questions to really understand what the genetic differences are between varieties–they could start understanding traits and some aspects of the domestication of grapes.

Over the last few years, Dr. Cantù’s lab has mostly been studying winegrapes, with a lot invested specifically in the quality of the genome of Cabernet Sauvignon, as well as its relatives. They have also been studying wild grapes, which are an important source of information for what they do. Early on when the lab started studying the major changes in genomes between varieties, they found striking genetic diversity. For example, about 20% of the genome of Zinfandel is structurally different from the genome of Cabernet Sauvignon. This is important because there are genes present in Cabernet Sauvignon that are not present in Zinfandel and vice versa. This does not mean that those genes are responsible for all the flavor and aroma differences, however, it is likely that some of the differences are caused by the difference in gene content between the two varieties.

The lab conducted this exercise across their collection of grape genome sequences. They found that the more they sequenced, the more genes they identified. They know that there are strong genetic differences between cultivars that result in different aroma compounds. For example, rotundone, which causes Syrah to have a black pepper aroma, is, for the most part, found in Syrah and not in other cultivars. Dr. Cantù wants to figure out how the chemistry of the grapes is affected by the genome, but from an industry perspective, understanding the genes responsible for differences in aroma and flavor between varieties will provide the information necessary to generate new cultivars by traditional breeding where those flavors and aromas are combined in a new and unique fashion.

Another important trait that they are looking at is disease resistance, which is also very strongly determined by the genetics of the grapes and their genomes. Grapes suffer from multiple, very severe diseases, so we rely heavily on fungicides and pesticides to control them. The idea is to be able to use genetic information to be able to identify other wild or cultivated grapevines to be able to introduce in our cultivated germplasm, genes that confer resistance to these diseases, with a goal of producing a vine that is naturally resistant, so it doesn’t need to be protected with fungicides and pesticides. Dr. Cantù’s lab is currently working in this area and they are focused on both powdery mildew and Pierce’s Disease. Both of these projects are federally funded by the USDA and NSF. The project with NSF looks at the natural resistance to Pierce's Disease in the population of wild grapes in the southern part of the USA. The study involves sequencing genomes, comparing them, and understanding what differences are associated with resistance or susceptibility to the disease so that they can breed new varieties using this information.

Part of Dario’s research focuses on domestication, the process of selecting and altering the genetic makeup of wild species so they become more appropriate for cultivation. This process happened over thousands of years and, through their research, Dr. Cantù and his team have been able to reconstruct events that happened thousands of years ago, as well as understand the characteristics specific to the cultivated grapes.

Dr. Cantù’s lab has been looking at genetic differences between cultivated and wild grapes, and they also have begun looking at regions in the genome that are distinctly different between the two groups. When they started, they found one region that is important for sugar accumulation in the berries, as well as genes associated with the softening of the berry–this approach compares the genomes to understand what may have happened thousands of years ago when wild grapes were selected. By comparing genomes of wild and cultivated grapevines, Dario and his team could identify the genes responsible for flower sex determination. This information was used to develop genetic markers to quickly identify male, female, and hermaphrodites in breeding programs.

Dr. Cantù’s team has also established a central repository for all this genomic information as it is useful for others performing research in grape genetics. It is important to release this information in a timely and accessible way.  So, a website was developed called Grapegenomics.com. It is free to everyone and all the genomic information is available. This program has tackled several genomes, each one of them part of a single or multiple projects. Over the years the lab has had the funding and support of both the federal government and the grape and wine industries in California. On the website, every variety has its own page, with information about the articles presenting the information about each genome, and tools for those involved in grape genetics research. This is a very important website for geneticists, and the wealth of information and easy access is invaluable.

Dario, together with Professor Andrew Walker, edited a book called The Grape Genome. It describes what is currently known about grape genetics.