An Interview with Andy Walker 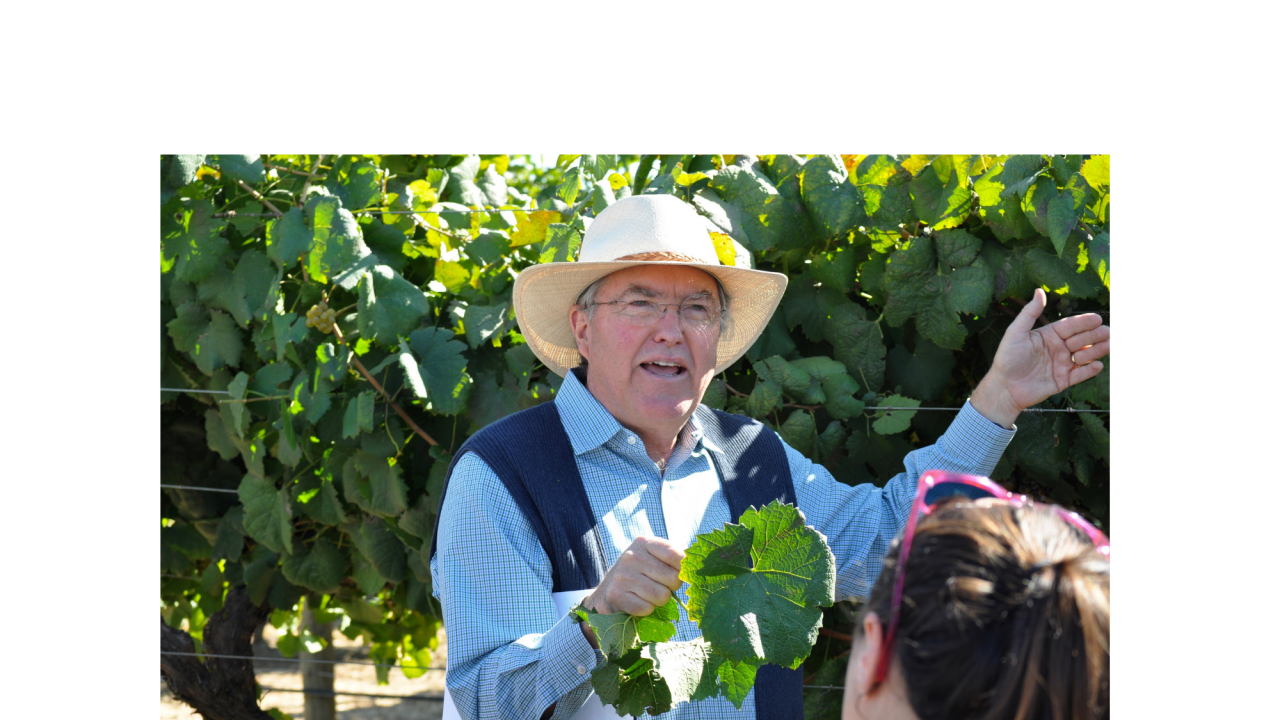 Caroline Firman and Karen Block had a chance to sit down and talk to Andy (via Zoom) in August 2021.  During our conversation, we found out some interesting things about Andy!

Where were you born?
Andy was born in the Okanagan Valley in British Columbia, Canada.  His parents moved to California and Andy lived in various parts of the State, graduating from high school in Marin County.  He mentioned that he had a typical childhood for people growing up in those years. He played tennis through high school. In college and beyond, he enjoyed playing squash and badminton.

We asked, “Did your parents drink wine?” Andy answered, “Yes, it was part of dinner.”

He received his undergraduate degree in 1975 from UC Davis in Botany.  He then worked with nurseries and did some landscape contracting work before deciding to return to graduate school at UCD.  He received his Master’s in Horticulture in 1984 and his Ph.D. in Genetics in 1989.  Andy commented, “I applied to school to get into agriculture, to grow something, and I thought it was going to be apples.  I found out that grapes were much more interesting than apples!”

How did you decide to get a Ph.D. at Davis and study Grape Breeding?
“I became involved with a rootstock project for my M.S. degree – the development of fanleaf degeneration resistant rootstocks that I worked on with Carole Meredith.”  It evolved into his Ph.D. work, and started a breeding project that he is still working on 40 years later!

How did you get the job here in the Department of Viticulture and Enology?
“The industry under the leadership of Phil Freese felt that Davis needed a grape breeder and they pushed to have the position approved.  I was fortunate to be finishing up my Ph.D. and was in the right place at the right time.  I applied and was offered the position, which I took in 1989.”  Most of the faculty retired and were replaced during the 80s and Andy was lucky to have interacted with all the old and new faculty.  “I have essentially been here for a generation of faculty because we have been going through a similar turnover of faculty over the last eight-ten years and now the Department needs to replace me!”

We asked Andy, what aspect of his job was his favorite.  He said he greatly enjoyed teaching both in the classroom and in vineyards while helping with grower pest, disease, and vine management problems.  Andy said, he also enjoyed visiting viticultural regions across the State and around the world and interacting with farm advisors.  He said, “I really enjoyed problem-solving in vineyards around the world”.  Andy also spent time each year studying and collecting grape species in the wild.  These trips involved graduate students and international visitors in his lab.

Tell us about some challenging projects/samplings.
Andy replied, “There have only been a few cases where I’ve been threatened for being on the wrong side of the fence while collecting samples…!”

We asked Andy, “What is the maximum speed at which you can identify a native grapevine by the side of the road? He answered, “About 60-65 mph, but it takes years of practice and many collection trips to know the species!”

We then asked him to tell us about the stuffed armadillo (in his office at UCD). The short version is that it was a gift from Peter Cousins (past Ph.D. student of Andy’s and now a grape breeder at Gallo).  One of the things that collection trips to Texas are full of is squashed armadillos.  He accidentally ran over a dead and bloated one while traveling with Peter,” leading to a rental car with a unique aromatic profile!”  Peter was so impressed by Andy’s enjoyment of armadillos, that he gave Andy a stuffed armadillo, which has since “impressed” visitors to his office.  It will soon reside at Andy’s house, although that is open to further discussion.

Students begin these trips thinking “this might be interesting” but after 300 to 500 miles a day on backroads, and collecting from dawn to after dusk, it can lose its allure.  Andy explained how it’s done:  “My job is to see and identify grapevines with 2 tires on the road, 2 tires on the shoulder, one eye looking for vines, and one eye looking for crazy drivers in large pick-ups!” 30 years ago there was much less traffic and nobody on the back roads, now it’s a bit more challenging!  “Claire Heinitz and I collected Vitis acerifolia in Texas, Oklahoma, Colorado, Arkansas, Kansas, and Missouri, which I had been through earlier, and no one was to be seen.”  This trip was coincidental with the oil-fracking boom and huge speeding oil tankers and equipment were really dangerous.  However, they found some very interesting grapes.

We asked, what will you miss most?  “I don't know if I’ll miss anything because I'm planning to continue with some work. In fact, I’ve asked people, if you want help just tell me, if you don't want help just tell me… I’m sure I’ll be involved in industry things.”  As a matter of fact, I (KLB) was recently talking with some industry folks who mentioned that Andy is involved in a rootstock project.  Andy answered, “Selections, we put another trial in down there, just recently.” Karen: They're looking forward to spending time with you.  Andrew Walker: yeah, it's gonna be fun!”

We asked, how has the department changed over the last 35 years?  “Overall, I think it's pretty much the same, surprisingly, and again the departure of a lot of knowledgeable and experienced faculty occurs cyclically and it looks like that same thing is happening now.  The transition can be a bit rough, but everyone gets back on track relatively quickly.  It is also important to remember we are one of the last commodity-based departments in the US and we have a responsibility to assist the industry in solving their problems.  We have to combine both applied and fundamental research."

Andy has been the thesis advisor for at least 80 Masters and Ph.D. students at UC Davis.

What are your plans now that you are retired?  It sounds like one thing he’ll be doing is spending more time with his grandchildren…and maybe some traveling if restrictions are lifted and flight cancellations are no longer common.

We will be honoring Andy on May 19, 2022, with a day-long, on-campus program that he gets to choose!