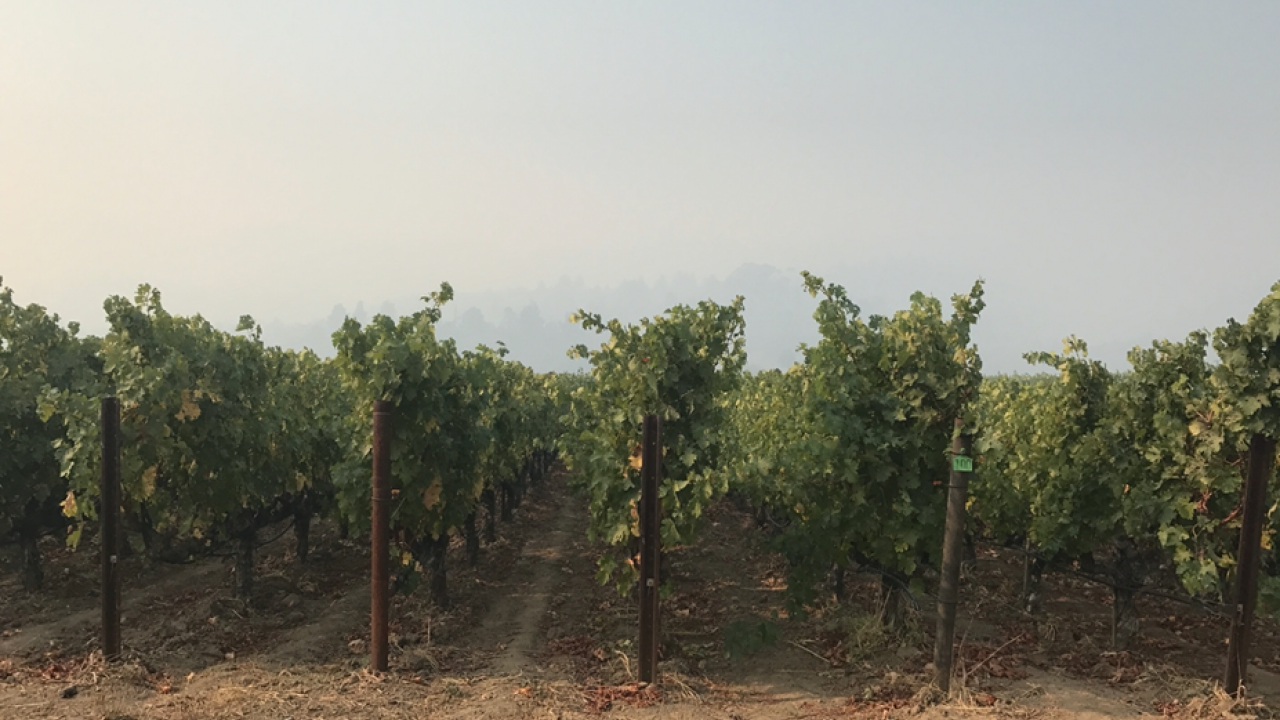 Grapevines are very resilient and do not burn easily. In many cases the vineyards act like fire breaks and are likely playing a beneficial role, due the fact that only a limited number of wineries have been destroyed or significantly damaged by past fires that have surrounded them. Expectations are that the grapevines will recover fully if they did not actually burn, although yield may be impacted. Also, even if the grapes were impacted by what we call smoke taint, there is no carry over to the next season. Studies to determine the amount of smoke exposure needed to result in smoke impact are still underway. The risk of smoke taint increases with continual exposure or repeated exposures of heavy fresh smoke.  So, any exposure to heavy smoke has the potential to be problematic. We strongly advise that growers and wineries test their grapes to determine potential risk. There is not a direct relationship between visual smoke and potential risk of smoke impacted grapes. What we see are the particulate matter, whereas smoke exposure marker compounds (volatile phenols) are not visible to the naked eye and do have a half-life. Anecdotal evidence suggests that the half-life may be around 24 hours, but this needs to be investigated.

Smoke exposure of grapes and wine:  If grapes on the vine have been exposed to smoke, then there is a potential risk of those grapes being smoke impacted. Currently the best way to evaluate risk is by testing grapes. It is also highly recommended to do small-scale fermentations and analyze the resulting wines, as research has shown that this is the best indicator of potential risk (find below the link to the AWRI small-scale fermentation protocol).   Grapes harvested and stored in bins need to be protected from smoke exposure as they can still absorb smoke marker compounds and result in smoke impacted grapes.  There is no data, but we do not expect smoke to be a problem in fermenting musts as they will be protected by the released carbon dioxide and finished wines should be sealed to protect them against any smoke that may enter the winery.

Smoke Taint Science: Research has found that there is a substantial increase in the levels of volatile phenols such as free guaiacol and 4-methylguaiacol but also o, p, m-cresol, syringol, and 4-methylsyringol in wine made with smoke-affected fruits. These compounds are present in wood smoke resulting from the pyrolysis (thermal decomposition) of lignin and result in high levels of overpowering smoky, cold ash characters in a wine. Volatile phenols also increase during bottle aging, apparently due to acid hydrolysis of glycosidically bound volatiles. It appears that volatiles such as guaiacol and 4-methylguaiacol can be absorbed through the berry skins and be glycosylated within. Basically, the compounds are bound to sugars in the grapes making them non-volatile. However, over time these bonds can hydrolyze in the resulting wine, as wine is an acidic medium (pH of 3 to 4), and when this happens these compounds do become volatile, contributing to aroma and thus potential off flavors. There is also some indication that bacterial enzymes in your saliva can also hydrolyze these compounds.

The phenological timing of grapevine smoke exposure may influence the severity of the taint in the wine. Early research indicated that grapes are the most susceptible to smoke taint from after veraison (color change for red grapes) to harvest. However, new evidence suggests that those findings may not be true in all cases, as during the recent wildfires in Australia, they found grapes heavily impacted by smoke even though they were pea size during the time of exposure. Until further research is available, we need to assume that grape berries may be sensitive to smoke at any time during the growth phase. As previously mentioned, no carry-over is found for smoke constituents the following season. Studies have shown that smoke-derived volatile phenols can be absorbed both directly via the berry cuticle (skin) and via the leaves. Translocation to the fruit may be possible but it seems to have a small impact. At this stage it is not recommended to remove the leaves until harvest. However, as leaves are also a potential source of volatile phenols, special attention should be given to remove MOG (leaves) from harvested grapes prior to processing. Washing the grapes prior to processing has no impact on potential smoke taint development as the smoke impact compounds are absorbed into the skin. Anecdotal evidence indicates however that removal of fresh ash may have some benefit.  All cultivars studied (Chardonnay, Cabernet Sauvignon, Grenache, Merlot Pinot noir, Pinot Gris, Sangiovese, Sauvignon blanc, Syrah etc.) were impacted by smoke exposure although the levels thereof did differ.

Should smoke taint be found in a resulting wine, several treatments have been suggested to mitigate the effects. Most fining agents reduce the amount of smoke-derived volatile phenols and the wines studied exhibited less intense smoky characters. However, most fining agents lack specificity, meaning they will also remove compounds other than smoke marker compounds and could impact wine quality. Activated carbon is seen as being the most effective fining agent (see link below regarding activated charcoal fining protocol). Similarly both reverse osmosis and solid phase extraction significantly reduced the amount of smoke-derived compounds. Unfortunately, the taint slowly returns after these treatments due to the hydrolysis of glycoconjugated precursors, which are not effectively removed during treatment. Although grapes and wines can be tested for smoke exposure marker compounds, it varies in its ability to predict the formation of different sensory characteristics related to smoke taint. The best predictions were obtained with analyzing both the free and bound forms of guaiacol, 4-methylcuaiacol, syringol, 4-methylsyringol, and 0- , p- and m-cresol. We know the wine matrix has a significant impact on the expression of smoke taint.

Different winemaking processing methods may also be used to minimize the impact of the smoke taint derived compounds. In general, reducing skin contact, using yeast strains to maximize the fruity characters in the wine and excluding press fractions, help decrease the apparent taint. Additionally, the use of oak chips and tannin enhances the complexity of the wines and decreases the perception of smoke-related attributes. However, it is advised to stay away from any barrel/oak toast profiles that may give additional smoke or related characters to the wine. These techniques may be helpful when a low level of smoke taint is present.

Research has shown that although different winemaking techniques can ‘hide’ the aromas associated with smoke taint, it cannot fully hide the retro nasal ash-like character that is very distinctive of this taint. Volatile phenols and their glycosides extract very quickly from the grape skins and lower fermentation temperatures and shorter skin contact does not really make much difference if you are not going to make a Rosé wine. Rosé wine is the only real solution for low to medium smoke impacted grapes, although it may not be an economically viable option. If the latter is not an option, make the best quality red wine and investigate potential treatments of the finished wine. However, press fractions should be kept separate as they contain much higher concentrations of the smoke taint markers. Due to the presence of volatile phenols in the skins, white wines are less impacted. However, the aroma profiles of white wine can still be impacted even though the wines do not showcase the traditional sensory markers for smoke taint. This indicates that at high levels of exposure, any wine can potentially be impacted, whether it is made with skin contact or not.

When a wine is affected by smoke, there is no perfect solution for removal.  Different commercial treatments were investigated by the Oberholster lab. This includes treatments with a range of different FDA approved enzymes, fining with different agents such as charcoal and molecular imprinted polymers (MIP), reverse osmosis (RO) and spinning cone technologies. Ongoing research indicates that current enzyme treatments are not very effective in hydrolyzing bound compounds. Activated charcoal and MIP fining, as well as RO and spinning cone, remove some but not all volatile phenols and could be a potential solution for low to medium impacted wines. However, efficacy is matrix dependent and bench trials, where possible, are recommended. Additionally, all treatments lack specificity and remove other flavor (volatile and non-volatile) compounds.

Another focus of grape smoke exposure research is on investigating potential barrier sprays that can form a barrier on grapes to prevent the absorption of volatile phenols in the grape skins. Unfortunately, results have been variable potentially due to the efficacy of coverage when spraying a canopy. An urgent need in the USA is to focus on determining baseline levels of smoke exposure marker compounds in different varieties to aid the interpretation of testing results and help with the resolution of contract disputes, etc. This will also aid our ability to predict the risk of smoke taint development in wine. Additionally, we need affordable and reliable methods to screen for all of the smoke exposure marker compounds (free and bound).

In summary:  even though grapes can be analyzed to determine the potential risk of smoke taint in wines, the predictive ability is not 100% due to synergistic and matrix effects. It is more an indicator to use care when processing the grapes and not introduce any element that can add additional smoky character. It is important to note that the compounds that are responsible for smoke taint, are naturally present in the grapes at low levels and that they are also part of the pleasant aroma compounds that are released into the wine during barrel aging. Toasting barrels (oak) has a similar impact and releases volatiles such as guaiacol and 4-methylguaiacol into the wine. At low levels it adds complexity to the wine. It is only at very high levels that it will be seen as a fault or taint and can decrease the quality of the wine.