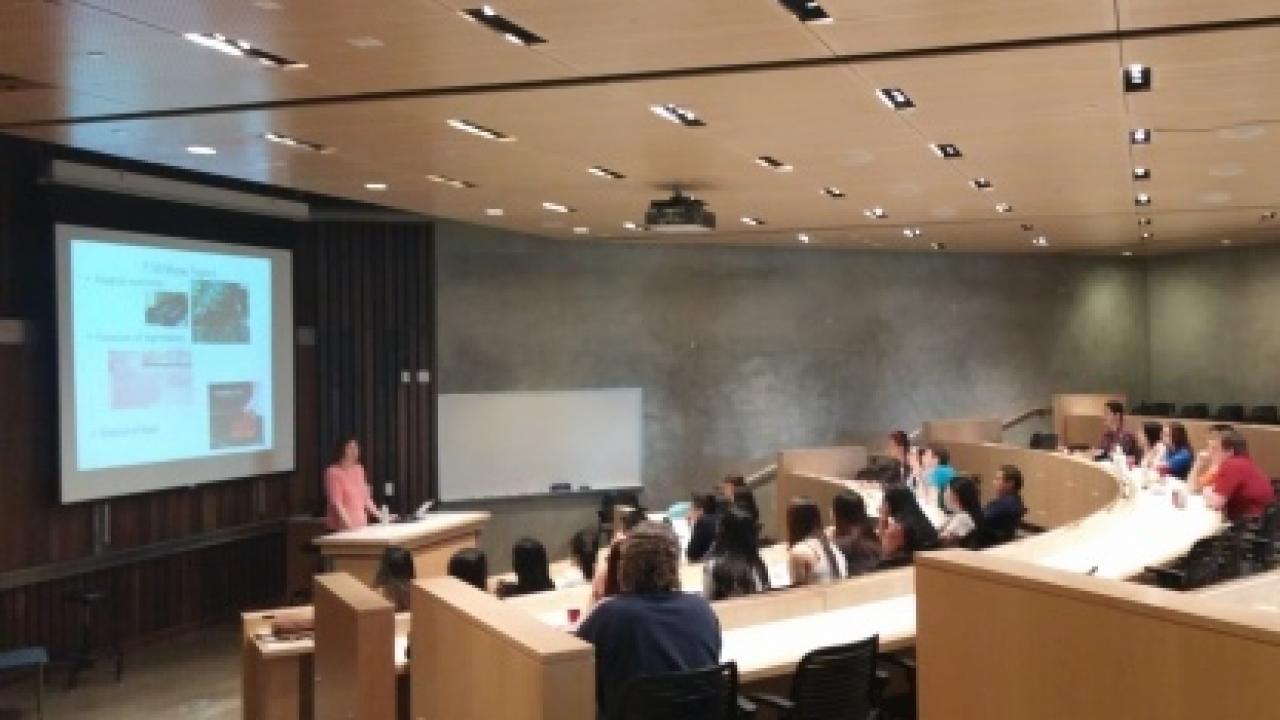 The area meeting was held on Saturday the 7th, which consisted of informational and fun activities for the students. The area meeting started with an entertaining and informative presentation by Dr. Gary Smith about California, UC Davis, and the Food Science Graduate Program. After the IFT Student Association Chapter Updates, all 43 students got creative in UC Davis' beautiful arboretum during an interactive food and art activity inspired by the pop-art style of Wayne Thiebaud, the painter who was a UCD professor in the '60s and '70s. Next, in the RMI Sensory Theater, Dr. Christine Bruhn gave an informative talk about her career in consumer science and provided sage advice to aspiring food scientists aiming to find the next solid step in their career paths. One of the highlights of the area meeting was a brand new cooking competition called "Broke College Kid meets Chopped", held in the RMI Food Innovation Lab. The students were mixed up into teams that competed to create a delicious and creative appetizer, entrée, or dessert, using ingredients commonly associated with a college student's lifestyle such as Oreos, Flaming Hot Cheetos, canned corn, and Nutella. The students presented their unique dish to three judges: Evann Dufort, Matt Ford (FIL Manager), and Cyn Leo (Whole Foods Davis store manager). The plates were judged based on originality, creativity, and taste. The winning team received Whole Foods gift cards and will be featured on the Whole Foods webpage, Costa Spyrou's blog "Broke College Kid," and on IFTSA's blog "Science Meets Food."

The College Bowl Competition on Sunday the 8th started an hour earlier due to Daylight Savings Time and the competition began after all of the students (and the judges) had their caffeine and enjoyed a breakfast sponsored by the UC Davis Department of Food Science & Technology. The judges for the morning were Dr. Jeff Bohlscheid, Dr. Alyson Mitchell, and Dr. Justin Shimek. All competing teams, friends, family, Food Tech Club members, and some UC Davis Food Science Alumni attended the event, hosted in the UC Davis Student Community Center. Moderated by Bruce Ferree, the audience thoroughly enjoyed each round of the competition, learning food science facts along the way. WSU, OSU, UCD and UBC competed, while UCB, FSU, and SJSU spectated. The final round was Oregon versus UC Davis. OSU had 2 victories and 1 loss; UCD had 2 victories and no losses. UCD won the Regional College Bowl Competition by an incredible 40-point margin with a final score of 30 to -10. The UC Davis College Bowl team will travel to compete at Nationals at IFT15 Chicago in July. We hope to see you there!

The IFTSA Area Representative goals for the Area Meeting and College Bowl Competition meeting were to allow students to experience Davis, create a networking environment, provide valuable food science educational opportunities, determine the regional College Bowl champion, and to have fun! Through months of organizing, planning, and emailing, each of the goals has been exceeded. The 2015 IFTSA Pacific area meeting and College Bowl Competition could not have been such a success without the support of our sponsors, and all of the student volunteers from the Food Tech Club and Officer Board. Thank you to all of our sponsors and volunteers for helping make food science dreams come true!